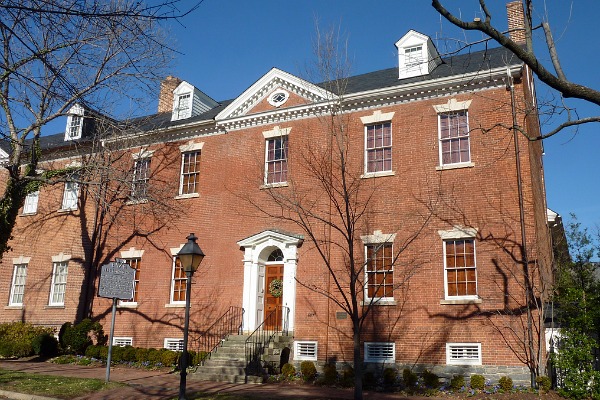 Robert E. Lee (b. January 19, 1807; d. October 12, 1870) was the son of Henry "Light-Horse Harry" Lee—a Revolutionary War hero—and is best known for his command of the Confederate Army during the Civil War. With his father’s military reputation preceding him, Lee graduated at the top of his class at West Point. He served in the military for many uneventful years. Then he earned his stripes in the Mexican-American War (1846). In 1861, President Lincoln offered Lee the position to command the Union army. But Lee could not turn his back on his native Virginia and instead became the general of the Confederate army. After the Confederate defeat, Lee retired from the military and returned to his estate in Arlington, Virginia. The estate was not too far from where Lee grew up, in this house, located at 607 Oronoco Street in Alexandria, Virginia. Lee came from a huge family descended from Jamestown settlers, who relocated by the dozens to Alexandria from rural Virginia in the late 1700s and early 1800s.

Where else did Lee live?