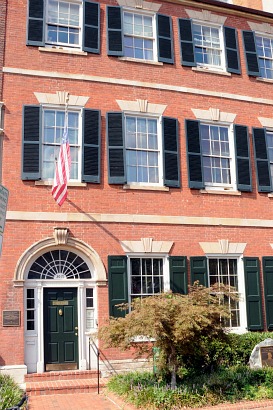 James Monroe (b. April 28, 1758; d. July 4, 1831) was the fifth President of the United States. His years in office (1817-1825) were known as the "Era of Good Feelings" because they were relatively free of partisan politics. President Monroe was best known for the Monroe Doctrine, an American foreign policy that strictly forbid further European expansion into Latin America. Prior to taking office, Monroe served as Secretary of State and Secretary of War during the War of 1812 under President James Madison. At the time, Monroe lived in this elegant Federal townhouse at 2017 Eye St. NW and continued living there for several months into his presidency.