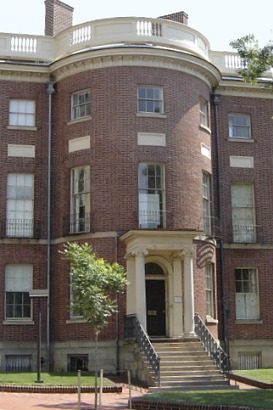 James Madison (b. March 16, 1751; d. June 28, 1836) served as the fourth President of the United States from 1809 to 1817. He was a small man and was often described as being aged in appearance. On his arm was wife Dolley Madison, a woman adored by the Washington crowd. James had a hand in some of our country’s most vital documents, including the Constitution and the Bill of Rights. He led the country in the War of 1812. Intense fires burned throughout Washington after British forces made their way into the capital, setting fire to many buildings along the way. During the war, James and Dolley vacated the burning White House and relocated to the Octagon House, located at 1799 New York Avenue NW. The couple lived here in 1814 and 1815 and later retired to Montpelier in Virginia.