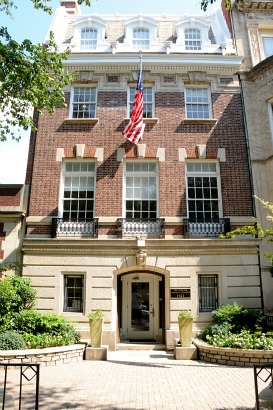 Helen Churchill Candee (b. October 5, 1858; d. August 23, 1949) was an American journalist and one of the country's first professional interior decorators. She is best known, however, as being a survivor of the sinking of the RMS Titanic in 1912. Candee was researching a book on tapestry in Europe when she was called back to the U.S. on emergency because her son had been injured in a car accident. When the ship sank, Candee managed to escape in a lifeboat. Accounts that she had had a romantic encounter while aboard were said to be inspiration for the 1997 motion picture Titanic. Candee had always been a survivor, however. After her husband left her, she earned a living as a journalist, amassing $20,000 to build this brick townhouse on New Hampshire Avenue in Washington DC in 1905.