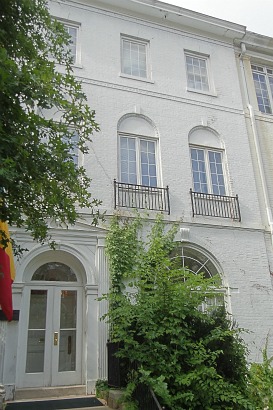 Eleanor Roosevelt (b. October 11, 1884; d. November 7, 1962) was the wife of U.S. President Franklin Delano Roosevelt and was First Lady from 1933 to 1945. As such, she helped shape and change the role of First Lady into a stronger, more public position. She held regular press conferences, and advocated for human rights and women's and children's issues. She even wrote her own daily column entitled My Day. She later served as a delegate to the United Nations and became chair of the Human Rights Commission for the U.N. While her husband served as Assistant Secretary of the Navy prior to his presidency, the couple rented this DC house, located at 2131 R Street NW. It was here that FDR's affair with Lucy Mercer supposedly blossomed.