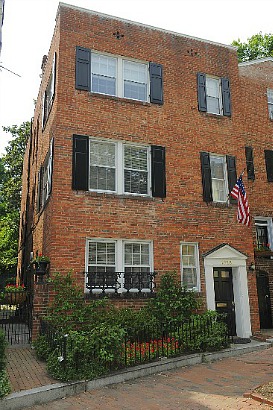 John F. Kennedy (b. May 29, 1917; d. November 22, 1963) was the 35th President of the United States. After serving in the Navy during WWII, his political ambitions took him to Congress and then the Senate. In 1960, Kennedy ran for president and was sworn into office in 1961. He championed human rights and was vigorous in his pursuit of civil rights legislation. However, his term was cut short when he was assassinated in Texas in 1963. As a freshman Democratic Congressman, more than a decade earlier, Kennedy shared this Georgetown row house, located at 1528 31st Street NW, with his sister Eunice and aide Billy Sutton. Also sharing the home were a cook and butler, both appointed by Kennedy’s father to keep the house in order. JFK resided there between 1947 and 1950.